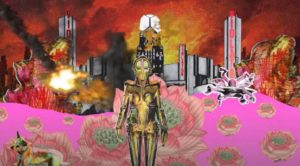 Have you ever thought about what it would be like to be an entity which thinks it is real, which is unshakeably sure that it exists, and which then discovers in no uncertain terms that it absolutely doesn’t? Think on that, if you will. Think on that. It is a rich source of revelation – there’s none richer, if I may say so. I don’t know if I’m allowed to say so; I presume that I am, anyway. I can’t see why not. In that moment of realisation lies so very much, if I may make so bold as to say so. So very much. Those ordinary things with which we concern ourselves and managed to enthuse about so ridiculously contain not just ‘very little’ in the way of actual substance but a good deal less than that. These ordinary things are the very essence of tedium, if you must know the truth, which of course you must. Indeed you must and I would not wish to short-change you on that score. We are creatures that perversely adore tedium – tedium is our medium, tedium is our melieu. What strange creatures are we, that rejoice daily in tedium and turn our backs on anything of genuine interest!

But I stray from my point, which is easily made but also easily neglected – in this moment of discovery (if we may put it like that) there is a richness and profundity beyond our ability to imagine. There is enough sheer flavour there to last you a lifetime. We often enough suppose that we have been surprised by this or surprised by that but what we count as ‘surprise’ pales into pure insignificance when compared but the moment of awareness of which I speak. We never knew surprise until that moment, we never did. We only thought that we did. Everything else in our experience is predictable you see; everything else is predictable in one very important regard – it is predictable in terms of that taken for granted element which is ‘the one who is having the experience’ (or ‘the one who counts that experience as their own’).

Here is a stone that never gets turned over therefore and that’s my point in a nutshell. That’s what I’ve been working up to saying all this while. That there is this stone that never gets turned over. Now suppose that all of a sudden it does get turned over – what do you suppose we would find there? What do you suppose, what do you suppose? And the answer is of course that we can never ever guess. We can never guess what we’ll find there because we ourselves are the stone! The simple elegance of this argument astounds me every time, it really does. It most surely does. This is the pure essence of surprise, the real deal. This is the surprise that catches us the most off guard that any surprise ever could do. ‘WHAT?!!!’ you say, ‘I never saw that coming!’ and of course you didn’t. You most certainly didn’t see it coming. You really and truly didn’t – you’re telling the absolute truth there, and fair play to you for that. I applaud you for that…

Art: Garbage – The Men Who Rule The World Video